I start to draw plans for a Slovenian sailplane build in 1949, and a biplace training high performance sailplane from 1963, named Cirus HS 62.

I believe, both  would be a nice refreshment aerotow Scale soaring events, among modern plastic sailplanes, and old vintage gliders. Triglav vas already made in past as an RC model, but not in a large scale.

And for a Cirus HS 62, I am pretty sure, there was no RC model yet.

Look at the drawings! They just calls for a building of RC model.

I gather drawings photos and informations for Triglav in old gliding magazine "Narodna Krila" (National wings) as you can see on the small preview below:

There was enough informations, to let me begin with making all necessary plans and drawings for a large scale RC model.  Here is one of the first drawings, where I begin: 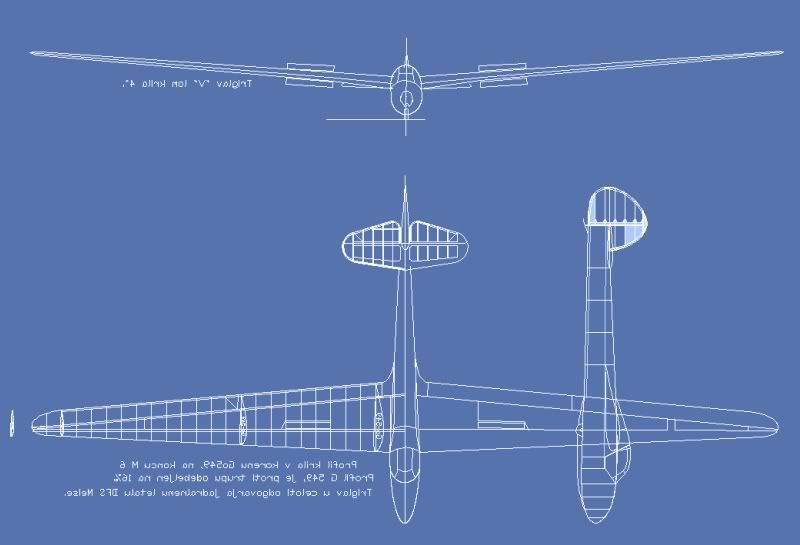 Triglav slightly resembles Moswey sailplane, but it is likely structural, specially the wing, similar to the Meise German sailplane.

The story behind this bi-place school glider is very interesting. But it is also so comprehensive, that it would take much space and time to tell all of the story. So, in short, the most important at this glider design is that its designer Nenad Hrisafovic was challenged to fulfill all odd requirements given in tender from Gliding association about type of structure, and loads that must sustain this glider. Requirements were pretty hard. So hard, that Cirus is actualy full aerobatic glider regarding the limit loads. You will get impression if I tell you that much later build famous Blanik L-13 would not fulfill these requirements, even we all know, it is successful school glider.

Designer Hrisafovic reach a peak of his aeronautic carrer in France where he play very important role in ARIANE rockets developement.

As there was very hard or allmost impossible to get some workshop drawings of this sailplane, I started with a simple 3 view drawings, that could be found in a gliding books and some Internet cources. Also there is an excelent story with some photos, about designing, building and flying this sailplane, on the website of Aeroclub Sarajevo.

I also contacted the designer of Cirus, mister Hrisafovic, and he was kindly give me hand to help me with informations about this sailplane, ragarding all details that are not available.

So, with all that help, I slowly managed to put together a drawing of the sailplane, that could serve pretty well for designing the RC scale model.

CIRUS HS 62 (right) and HS 64 (left) as scanned from a book about Yugoslav sailplanes.

Nice shot of CRUS HS 62 prototype as being tested for flight qualities, and performance. (Photo property of Aeroclub Sarajevo and Mr. Hrisafovic)

Nice shot of "bussines end" of the glider! The view for the pilot and instructor was certainly awesome in this cute canopy! (Photo property of Aeroclub Sarajevo and Mr. Hrisafovic)

CIRUS HS 62 prepared for the flight. Quite a large sailplane with span of 17 and length of over 8 meters! (Photo property of Aeroclub Sarajevo and Mr. Hrisafovic)

NOTE: these two drawings shown below, are "working" drawings and are not finished yet, so some deviations from "real thing" are stil present and some things are still missing. The goal is to make a drawing for the gider in such way , regarding the quality, as one can see in Martin Simmons books.

And this is my drawing, based on all informations gathered up to date.

As seen from my drawing, fuselage was a welded steel tube construction. In these days such fuselage design was already obsolete, but designer was forced to use them because the requirements given in tender demand that.

One of the story behind that demand was a huge stock of steel tubes, left from another project (High wing motorplane Kurir), and they need to be used. For that reason, many of gliders from that period were steel/fabric fuselage design (Letov 22, Libis 17..)

Anyway odd demands from tender or not, desugner Hrisafovic managed to succeed making a very cute sailplane inside the requirements. The more you look at CIRUS, more eye apealing it looks! Just try!

So, when all drawings of this sailplane will be done, I will start to make plans for an 1:4 scale RC model.

It wiill be quite large with wingspan of 4,25m!

So, if you interested in any of these two vintage sailplanes, be welcome to visit this site again!

Oops, you forgot something.

The words you entered did not match the given text. Please try again.

Reply Mark Hall
9:13 AM on November 11, 2013
Hey! I am interested in building the Cirus Plane. Do you have plans available for the plane? Thanks